Is your home making your dog sick? 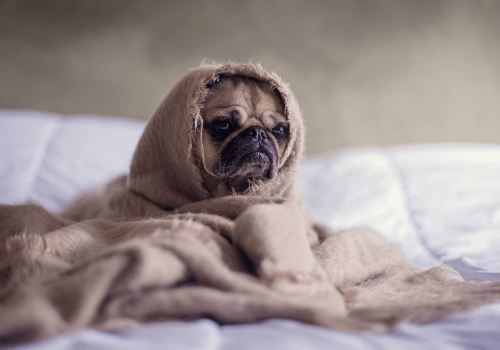 Radon is completely odorless and tasteless. Even if you are breathing it in at a high level, there are absolutely no symptoms of radon poisoning until it’s too late. Exposure to high levels of radon over time puts you at tremendous risk of developing lung cancer. If you smoke, this puts you at an even higher risk.

Pets, especially dogs, can be seriously affected from radon exposure.

What are the effects on the respiratory system?

The main threat from radon comes from the possibility of inhaling the gas and its radioactive heavy byproducts that collect in the air, which can potentially cause respiratory disorders in you and your pets. These decay products stick to the cells that line the passage leading to the lungs.

Scientific research concludes that radon and its isotopes have carcinogenic effects on animals. When radon is inhaled in combination with the decay products, such as cigarette smoke or uranium ore dust, it causes lung carcinomas like nasal carcinomas, epidermal carcinomas and skin masses in animals. Dogs exposed to paints, chemicals and urban areas are considered to be at a greater risk. Typical symptoms of dogs that have radon cancer are:

It’s a possibility that a dog who is suffering from cancer may not even show signs of illness unless the disease gets severe or is in its final stage. Because of this, the diagnosis for canine cancer is therefore generally made at a very late stage and, as a result, most times it cannot be cured. However, if diagnosed, the treatment includes surgeries, radiation therapy, immunotherapy, or chemotherapy. The veterinarian may refer the pet owner to a board certified oncologist for further tests.

As a precautionary measure, testing should be done to check the levels of radon in the house. If the levels are found to be high, there are steps that should be taken to lower the concentrations to acceptable levels.

Contact Aadvanced Aair to get your home’s radon levels tested and if needed, we can provide continuous radon monitoring and radon mitigation.

Looking for a price? Get a no obligation, free estimate.